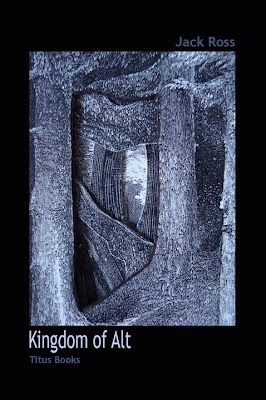 Trauma: Journal
Haiku Diary
The Isle of the Cross
The Purloined Letter
Notes found inside a text of Bisclavret
Finding His Stash
Before the Disaster


Coursebook found in a Warzone: A Whodunit 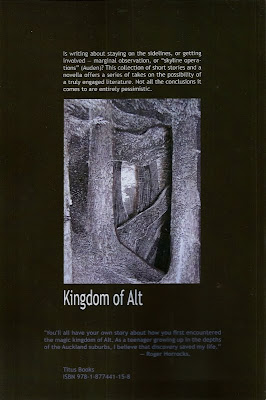 Is writing about staying on the sidelines, or getting involved - marginal observation, or "skyline operations" (Auden)? This book offers a series of takes on the possibility of a truly engaged literature. Not all the conclusions it comes to are entirely pessimistic.

"You'll all have your own story about how you first encountered the magic kingdom of Alt. As a teenager growing up in the depths of the Auckland suburbs, I believe that discovery saved my life." 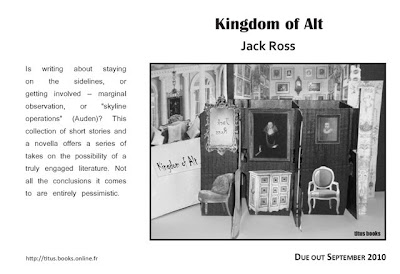 This is a collection of seven short stories, together with a longer, 100-page novella. The stories are grouped in a section called “Marginalia,” since they're all (more or less) concerned with the subject of notes and jottings written in the margins of more conventional texts. In the case of “Notes found inside a text of Bisclavret,” the frame is a dual-text translation of an Old French poem about a werewolf by Marie de France, which is adorned by various notes telling a somewhat more contemporary story. The other stories are concerned with diaries and journals (“Trauma: Journal” and “Haiku Diary”); a long-lost novel by Melville (“The Isle of the Cross”); a forged letter by Baudelaire, and its links to The Protocols of the Elders of Zion (“The Purloined Letter”); a heap of print-outs of internet pornography, (“Finding His Stash”); and an examination report on a Masters Thesis (“Before the Disaster”). All the stories (with the exception of “Finding His Stash”) have been previously published (in part or in full) in periodicals or online.

Notes found inside a text of Bisclavret 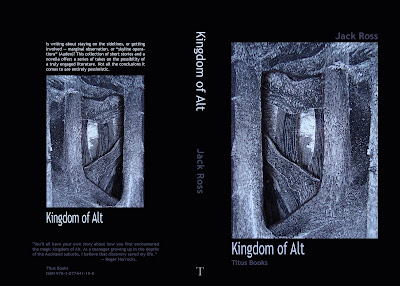 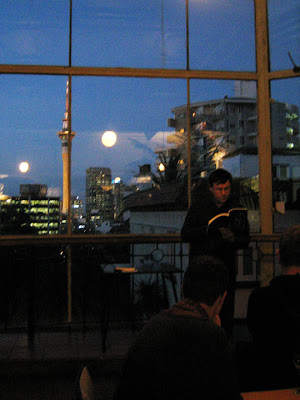 In a launch speech made by Roger Horrocks for Jack’s first collection of short stories, Monkey Miss her Now, published in 2004 by Raewyn Alexander’s imprint Danger Publishing, Roger said:

You’ll all have your own story about how you first encountered the magic kingdom of Alt. As a teenager growing up in the depths of the Auckland suburbs, I believe that discovery saved my life.


By this he meant the kingdom of Alternative fiction, film, art, underground comics and zine culture. When Jack heard Roger’s words he identified with them immediately and decided that this would be the title for his next collection of stories. And here it is.

I’m very pleased to have been asked to launch Jack’s latest book Kingdom of Alt, published by Titus Books. Kingdom of Alt is a collection of seven stories and a new novella, ‘Coursebook found in a Warzone: A Whodunit’.

The thing about alternative fiction is that you can’t neatly sum it up in a short speech and you shouldn’t even try. The reader is a collaborator, so what I might have to say about this book or any of Jack’s other books for that matter, will be completely different from what any other reader will have to say about it.

Jack’s books are writerly texts and readers need to be prepared to participate – to take part in a kind of performance and to go on an adventure where they might end up anywhere, everywhere and nowhere all at once. To quote Roger Horrocks again:

Once a character [in Jack’s stories] has walked out the door, he or she can end up anywhere in space, time or language.


As a reader you are encouraged to tag along, but I can tell you, you can find yourself in some pretty strange and disturbing places, so consider yourself warned.

As an initiate of Jack’s Kingdom of Alt for the past four years with my own sumptuously decorated chamber inside the palace, I’ve utilized a number of strategies and techniques when reading Jack’s books, particularly his trilogy of novels dealing with the subjects of insomnia, amnesia and blindness.

Multicoloured post-it notes were used to chart all the dismembered stories in Nights with Giordano Bruno, and I nearly composed a novel of my own on the side trying to nut out all the clues and ciphers so that I could play the sealed "game for one player" that was tucked inside the back of each copy of the book.

Pink clothes pegs and a retractable washing line were essential for reading the back to front text in my misprinted copy of The Imaginary Museum of Atlantis, and a magnifying glass came in very handy for reading the palimpsest text running beneath the main text of EMO.

So I’ve definitely embraced the idea of collaboration when it comes to Jack’s books although generally I don’t respond to his texts in words, but instead find myself making little models out of paper and card: a pop-up minotaur, a labyrinth made out of cardboard wine-bottle dividers, a concertina castle interior where a werewolf lives made from a fold-down six-pack carton, or, in this case, a 3D paper forest made with photocopies of illustrations by Gustave Doré.

I guess what I’m trying to tell you is that there are very few signposts. You need to find your own way into Jack’s Kingdom of Alt, but I will give a couple of tips to any brave new initiates who want to cross the drawbridge.

Don’t be put off by weird page layouts like this, from ‘Coursebook found in a Warzone: A Whodunit’: 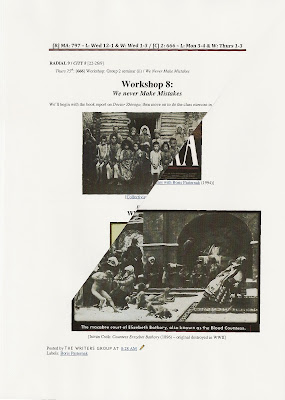 Jack’s maniacal tendencies are well known to those of us who know him so it should come as no surprise to his friends to learn that in the process of researching his novella which features the story of a man who teaches two literature courses in the midst of a war-torn city that Jack invented two entire university papers, ‘Crisis Diaries’ and ‘Banned Books’, complete with an anthology of readings, extensive lecture notes, and a fully navigable blog for each course that you as readers can access via the links on the copyright page of Kingdom of Alt to add to your reading experience.

Another thing to note is that you should be suspicious of the subtitle of the novella, ‘A Whodunit’, because you may not necessarily be able to solve this whodunit and you might even find yourself wondering just what it is that got done!

The subject of marginalia unites the collection of seven stories that come before the novella in the book. There’s a little mouse called Max who hovers at the edge of one character’s tormented imagination before the spiders and bloodless corpses take over. There are the hidden clues in an allegedly counterfeit letter written by Baudelaire to his mother, and the scorching marginal notes written by an angry wife in the pages of her husband’s pornography collection. There are the creepy handwritten notes of a young anorexic woman in the margins of a poem about a wolfman cruelly treated by his wife, and in the story ‘The Isle of the Cross’ Jack takes the idea of marginalia one step further, with his character writing in the margins of a non-existent text, Herman Melville’s great lost manuscript ‘The Isle of the Cross’.

I’ll leave you to puzzle the rest out for yourselves when you buy a copy of the book and I’d now like to invite Jack to read a passage from ‘The Isle of the Cross’. 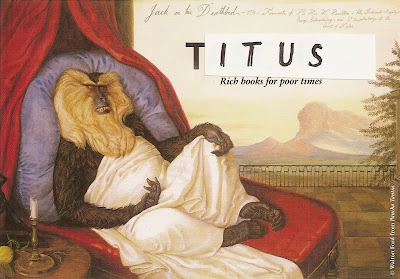 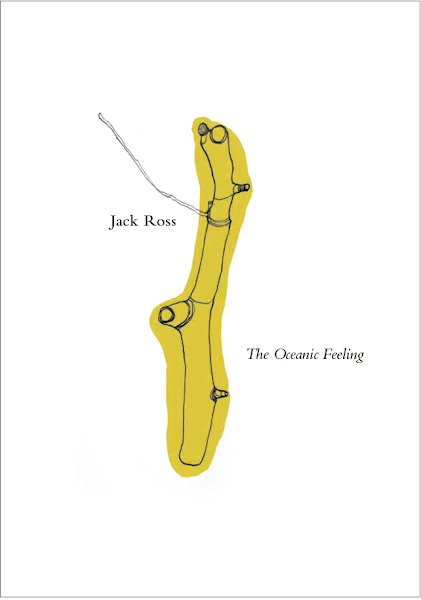