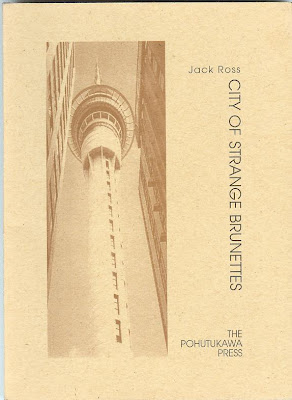 Recovery
On the Occasion of Wet Snow
Albany, Quad Block 8
One Version of Pastoral
City of Strange Brunettes
East Coast Bays, Winter
Bayswater, Night
On the Edge
Water-slides
Before the Rain
Morning at a Language School
Auckland by Night
Margarita’s
Unsent Letter to a Celeb
Windy Day
Elegy to the Memory of an Unfortunate Lady
Fashion ‘97
Two Kaipara Poems:
1 – Baylys Beach Revisited
2 – Muriwai 1997
Dressing Down
Angel
Reading the Entrails
A Road through Pylons
The Prospect of the Bungy-Jump
Influenza
Insomnia – 3 a.m.
End of the Year at the End of the World
After Rilke
The God Abandons Antony
Poets at Seven Years Old
After Petrarch
Aubade
Bilingual Recipe for Big Macs
Sig.na Greta Eta Meets Sigmund Freud
Prothalamion
For Walter Jensen
Poem for My Nephew
Elegy for Ames
Outside Cambridge
Théâtre antique d’Orange
On Failing to Meet the Zen Master
Stanzas of Consolation in Despair
Inscription in a Copy of The Tale of Genji
First Love
After Reading Berryman’s Sonnets
Sex-Talk
The Rooftop Cavalier
The Psychopathology of Everyday Life
Modem not Responding
Life in a Chinese Novel 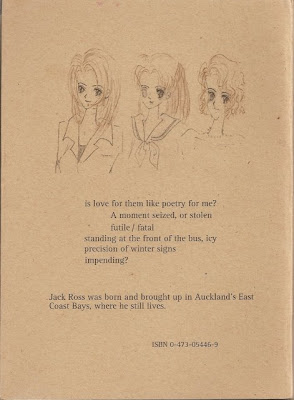 is love for them like poetry for me?
A moment seized, or stolen
futile / fatal
standing at the front of the bus, icy
precision of winter signs
impending?

Jack Ross was born and brought up in Auckland’s East Coast Bays, where he still lives. 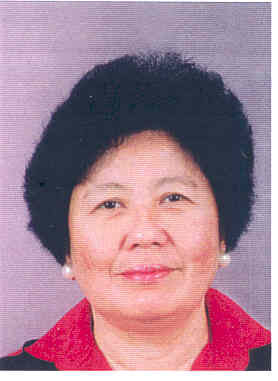 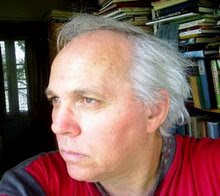 Before I consider the general postulates of Ross’s poetry in Brunettes, I’ll comment on certain particularities in the poems. There seem to me to be, broadly, four approaches to structure and style by Ross.

There are short and (sometimes) technically near-flawless poems employing rhyme, iambics, and relatively regular metre. Poems such as “Outside Cambridge” and “Théâtre Antique d’Orange” are examples. These are of a fairly conventional, late-modernist type. Notwithstanding this, I like the sense of time in these two poems. There is an (actually not too unlikely) mix of Tennysonian and Eliotic echoes. Others of this type I feel need more work.

Then there are Ross’s “after” poems. These include translations and/or poems in the style of Cavafy, Rimbaud, Petrarch, and Apollinaire. In “After Petrarch”, the attempt to mix a sort of Arcadian style with the vernacular nearly founders in cliché. However, this may be Ross’s addition. Certainly the language is never stilted and I found “Poets at Seven Years old” to be quite brilliant.

The third type of poem seems to be influenced by Olson, Pound, and possibly Smithyman. Ross was a colleague and friend of Smithyman, and “Two Kaipara Poems” is dedicated to K.S. Here, in an interesting heterogeny, “plastic bottles” vie with “pale avians” as well as the slangy “3 K’s” (Kendrick, Katherine, Kilometre?). Here too Ross talks, as he so often does (directly and metaphorically) to the reader:


the organ of the surf (do you like that,
old man? Yes – runs and stops of waves
just like a keyboard – white
upon blue-grey)
has not mastered polyphony as yet
but gets its own effects –
brutally simple, brutally short:
“Come in and try your luck with us.”

In these more jagged, fractured or multi-vocal poems Ross employs ellipsis, enjambment, foreign languages, allusion and quotes to good effect. And there is an interesting and halting style that is not immediately attractive but always challenging. The poet wanders through Auckland’s city centre (the Atrium on Elliot) to Bayly’s Beach. At times there is a detached, cool, ironic or satiric approach. It’s almost as if Pope and Tom Eliot had collaborated.

The fourth type is an attempt, it seems, to lighten up and experiment both with form and content. These don’t always work, but it shows an effort to “mix it” and take some risks. Ross works by restraint, and then by providing contrasts to that restraint. For example, in “The Psychopathology of Everyday Life” he “saves” the first stanza with the near savage: “... fuckers to a man”, and then , in part two of that poem, rebukes himself with some clever Freudian slips:

A pitiful excuse
to drag in something
that’s sordid.

Dragons - id;
the ego is the king
full of false errands


Perhaps the implied postulate of Ross’s work is an attempt to bridge old and new or modernist forms There seems (at any rate in the book under review) to be a strongly intellectual and informed consciousness whose struggle with the id or ego (sometimes dark or even humoresque) are shown in “Sex Talk” which begins (deliberately shockingly?)


Your cunt
tells me your
candour, pulse, the tide


One thinks here of Donne or Marvell, rather than Acker or Henry Miller. But even though I admire this poem, reading through Brunettes left me feeling that Ross has not allowed himself sufficient of Keats’s “Negative Capability” – “the ability to be in doubts … without any irritable reaching after fact or reason.” In fairness, Keats himself never quite achieved the kind of brilliant ambiguity he admired in Shakespeare (probably the Shakespeare of Lear or Timon).

Ross can’t be accused of “losing control,” and that very restraint is a strength when it combines contrast to achieve sudden scintillations. Olson was interested in the need for a polis (as Ross remarks in the Pound-Olsonian influenced “Stanzas of Consolation in Despair”), but also in moving “instanter to instanter” from eye to breath to mind to hand. His phenomenology was his ontology, and that’s why Olson seems to ramble (in recorded lectures for example). Some of Ross’s “third type” poems have a ramble coefficient, but others are a little too controlled. In other words control is good, but so is ramble!

In his more experimental writing in Brunettes, Ross perhaps shows he is possibly doing some “loosening” exercises, which may lead to his surprising us more in the future by building some imperfect and beautifully irrational structures. Here, however, is an example of the excellent compression he can achieve. “First Love” has the bonus of the wonderful word “craquelure:”

We built a man of slates, and after years,
revisited, the rock had grown a face.

We counted on the winter to preserve us.
Spring runoff leaves no craquelure to trace.